The first class I ever taught was a developmental English class. I didn’t do a very good job with it. I was a first-semester graduate student in my early 20s, filled with big ideas about philosophy and literary theory, and those topics probably made it into my class inappropriately from time to time. My training—a composition and rhetoric class which I was taking parallel to the class I was teaching—was identical to the other grad students who were being coached to teach Composition 1 for the first time, except that I wasn’t teaching Composition 1. Looking back, it is clear that I didn’t have the preparation or support to meet the needs of the students in a developmental class. By the way, this unnamed institution was not the one from which I would end up graduating.

I still find myself thinking about an embarrassingly naïve conversation I had with a colleague—another graduate teaching assistant—about that one student whose writing gave me the most anxiety. “He can’t get the difference between “the” and “a” right,” I reported to my colleague, “and he isn’t even using words like ‘of’ and ‘from’ correctly.” What was I ever going to do about it? Instead of the shock that I had expected, my colleague asked where the student was from, I explained that he was from somewhere on the West Coast of Africa. Then (and I never saw this coming) my colleague asked what the essay was about. At that moment I realized that I had dismissed the entire piece of writing over grammar errors that felt foreign to me.

Upon revisiting the essay, it was clear that the student was able to make a claim and back it up with evidence, therefore absolutely meeting the objectives of that particular assignment. Then it became clear, as had been patiently explained to me by my colleague later in the conversation, that those preposition errors (from, of, to, about) and article errors (the, a, an) were just the most normal thing for many international students whose first language is not English. Maybe correcting those preposition errors didn’t represent the most important aspect of my class. And, probably, I was worried when I shouldn’t have been. So, regarding students whose first language is not English, the question that might be posed at this point is: When to worry and when not to? Or, more importantly: How can we best address the unique needs of these students?

For the purposes of this discussion, let’s set aside the fact that this English language learner was placed in a developmental English class, which probably did not match his needs. Yes, these things happen, and I think a lot of us are working toward making sure that, in the future, they don’t. Rather, I mean to focus this discussion on some practical strategies for supporting the English language learner who is sitting in your (or your colleague’s) composition, speech, math, music, nursing, welding, or auto body class.

The primary strategy I recommend is to find a way to get that student reading regularly outside of his or her coursework, as I consider reading to be the best strategy for building vocabulary (as well as punctuation, style, sentence structure, paragraph development, and other skills). Yes, that is just about the same advice I would offer for any student who wants to work on his or her communication skills, but I think that vocabulary is a particularly important skill for an English language learner. We’re talking trade magazines, popular magazines (yes, I said it), newspapers, essays, or books—but I don’t think it necessarily needs to be literature. I’d recommend whatever the student is interested in; for example, I recently sent a student to Walmart to find some popular magazines on auto body repair, which is his area of study, and I’m actually quite confident he will spend some time reading those articles on his own. Having said that about the importance reading habits outside of class, my larger point is that, when it comes to English language learners, the opportunities to communicate in English outside of class (applying the lessons outside of campus) are probably more important than time spent in class.

From that practical advice, allow me to transition to some more abstract ideas about what might help us assist English language learners. First, I will offer a useful distinction: In any given communication, errors might distract from the ideas being communicated, but do they interfere with the idea being communicated? (As an aside, I would argue that this question is relevant to any student writing in any writing class.) Between the instructor and the student, this, of course, works both ways. On the student side, English language learners often dismiss entire chunks of communication because they don’t recognize one auxiliary word. For example, if someone is explaining that “X is so much better than Y because…” a student might freeze up, disregarding the entire communication because the student didn’t know what than means. Such a student is likely focusing on what he or she does not understand, rather than what he or she does understand in any given conversation, which is a habit that should be broken.

This brings us to the dangers of habitual translation. Among the many reasons why communication might break down over the single word “than,” as described in the previous example, perhaps the most common reason is that the student has developed (and fossilized) the habit of translating everything he or she hears in English to his or her native language. Of course, if the student is translating everything in his or her head, the student is bound to get stuck on one or two seemingly key words that might not actually be important to the message being communicated. Therefore, students should be discouraged from this habit of translating—or, rather, students should be encouraged to think, read, and write in English at every given opportunity. This may mean changing their social networks over to English (or seeing social networking as an opportunity to communicate in English).

This may also mean identifying students who rely on a translating device or app and encouraging those students to give up that tool in favor of using strategies of identifying vocabulary in context; all of this starts with focusing on what students understand as opposed to focusing on what they don’t understand. In some circumstances, perhaps it’s best just to let the student use a translating device to navigate an important administrative task (for example, navigating the financial aid office), but I would encourage any given student to break his or her reliance on a device in nearly all other academic situations.

I would recommend that we instructors do what we can to both break the aforementioned fossilized habits, but we should also be helping these students find new opportunities to apply their English skills in their community whether participation in that community happens online, at the grocery store, at home, at the coffee shop, at church, at the mall, or on Main Street. Finally, let’s return to an earlier idea regarding English language learners who are placed in developmental English courses. Let me be clear: The needs of students placed in developmental education courses and the needs of English language learners are not necessarily the same needs—but that’s, of course, a topic for another blog post. (See what I did there? Kristi and Phip await your submission…) 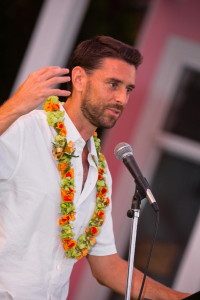 Scott Abels is an instructor at Northeast Community College, where he coordinates the Developmental English Program as well as the ESL program. Originally from Norfolk, he has taught in colleges and universities in Kansas; Idaho; Oaxaca, Mexico; Hawai‘i; and Nebraska. He has an MFA in Creative Writing (poetry emphasis) from Boise State University, and he is also the author of several books and chapbooks, including New City (BlazeVOX, 2014) and Rambo Goes to Idaho (BlazeXOX, 2011).  To contact Scott, please email scotta@northeast.edu.